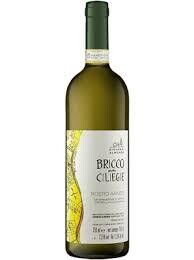 An impressive white wine made from Arneis grapes from one of the best vineyards of Giovanni Almondo, where there was once an orchard of cherry trees. This is exquisitely balanced, with good intensity and a long, lingering finish. The Giovanni Almondo winery is among the most appreciated for Italian white wines, and this Roero Arneis (Bricco delle Ciligie) is a must-have.

Domenico Almondo is widely considered one of the best wine producers in Piedmont in the Roero , the left bank of the Tanaro river, one of the men who gave greater visibility and prestige to the wine. The area now has its own name, two in fact, Roero Arneis for white wine, which in many markets and for many attentive consumers has supplanted Gavi as the main region for whites, and Roero for Nebbiolo- based reds .

A lot of Barbera is also cultivated and the old vineyards supply grapes for wines that can be positively compared with those produced in other parts of the Barbera d’Alba production area . On paper, there is no reason why Roero should not be a better known area and its highly valued and sought after wines. Unfortunately for its producers, directly next to Tanaro there is another viticultural area called Barolo, and the greater notoriety of this bulky neighbor had the effect of casting an unwanted shadow on the many excellent quality wines of the left side.